ScanImage uses Laser Beam Modulators to adjust the illumination intensity of the sample. Proper beam modulation ensures that the image contrast is sufficient, while preventing damage of the sample from overexposure.

The configuration of a beam modulator is described in the following section: Beam Modulator Configuration.

Pockels cell and AOMs exhibit non-linear modulation in relation to an analog control signal. To correct for this non-linearity, ScanImage can automatically calibrate a look up table (LUT) to linearize the beam modulation. The LUT calibration requires a photodiode in the beam path (see Beam Modulator Configuration).

Once devices are properly set up, they can be calibrated via the Power Controls window, or from the beam modulator’s widget. A successful calibration will run without any further notification to the user. To see the calibration curve, the user can click the Show LUT button from the widget. 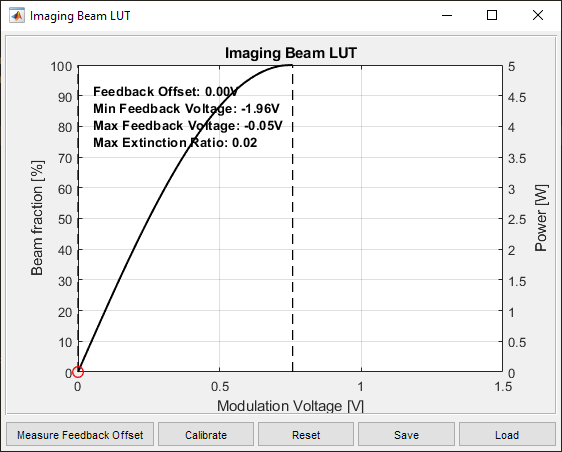 If the curve suggests there is an issue, corrections can be attempted and then additional calibrations can be run from the [Beam Modulator Name] LUT window.

Additionally, the user can measure and eliminate “dark current” or ADC offset of the photodiode in the LUT window via clicking Measure Feedback Offset. the user is prompted to block laser beam for the Beam Calibration offset measurement. All exiting and subsequent calibration curves are adjusted to reflect this input offset.

Ensure that the photodiode gain is set such that the maximum laser intensity returns a voltage close to 10V, but at the same time does not saturate the photodiode.

The beam power can be adjusted during an acquisition from the Power Controls window via the slider or the percent power editable field.

During an active acquisition, each time the slider is moved the live output signals are updated. It is more efficient to move the slider to the exact desired position or use the number control than to repeatedly click the slider button. 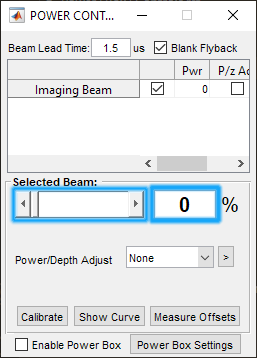 When ScanImage is idle, the beam power can be modulated via the Beam Modulator widget by clicking and dragging within the rectangular area.

The widget will always indicate the current output power state of the scope.

Older versions of ScanImage, implemented a Direct Mode. This functionality has been deprecated as of SI2020, and has been replaced by the Beam widget.

The beam power can be set to automatically vary with depth of the focal plane into the sample to account for power losses within the sample when doing stacks. These features are accessed through the Power Controls window as shown. 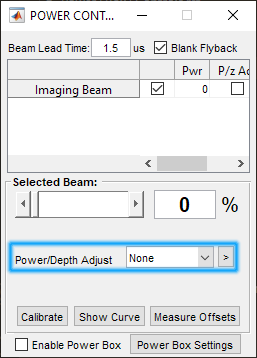 Click the dropdown to reveal a set of options for depth adjustment:

Specifying Beam Power for rectangular ranges within a Scanfield¶

Controlling beam power for specific locations in the scanfield is done with a feature named Power Box. Before enabling power box, click Power Box Settings to configure the power box. This will summon the Power Box Controls window:

The power box may then be moved and sized to fit a region whose beam power should be different from the rest of the scanfield. Clicking and dragging the centroid of the red quadrilateral will change its position, while clicking and dragging the corners will change its size. Alternatively, the location of the top-left corner, the width, and the height can be specified by either scan fraction or Pixels. 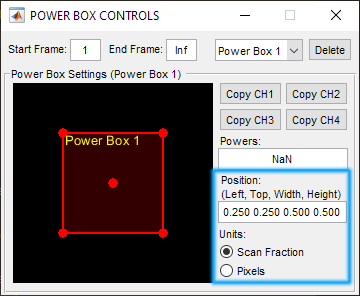 Once done, another power box can be added via the dropdown menu. Each of the Power Boxes can have different power levels, which are specified through the Powers field. Powers is given as a vector where each index is assigned a beam modulator in the order that they are listed from the Power Controls window:

Additionally, the start time and duration that power boxing is applied can be set from the Start Frame and End frame fields. 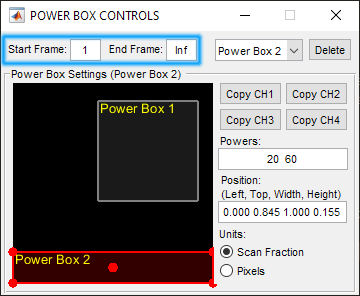 Beams devices play a big role in other features such as Photostimulation and Waveform Optimization. See the below list of pages which use Beams in ways not described here: