This feature is Resonant Scanning (ResScan) only.

To synchronize external events to image data, ScanImage® allows to record precise timestamps for up to four auxiliary digital trigger lines (currently only supported in resonant scanning mode). To achieve the highest temporal resolution and accuracy, the timestamps are generated on the FPGA which is also responsible for image formation. An additional NI SCB-19 breakout box is required to feed the trigger input signals through the NI FlexRIO digitizer adapter module (NI5732/NI5734) to the FPGA. 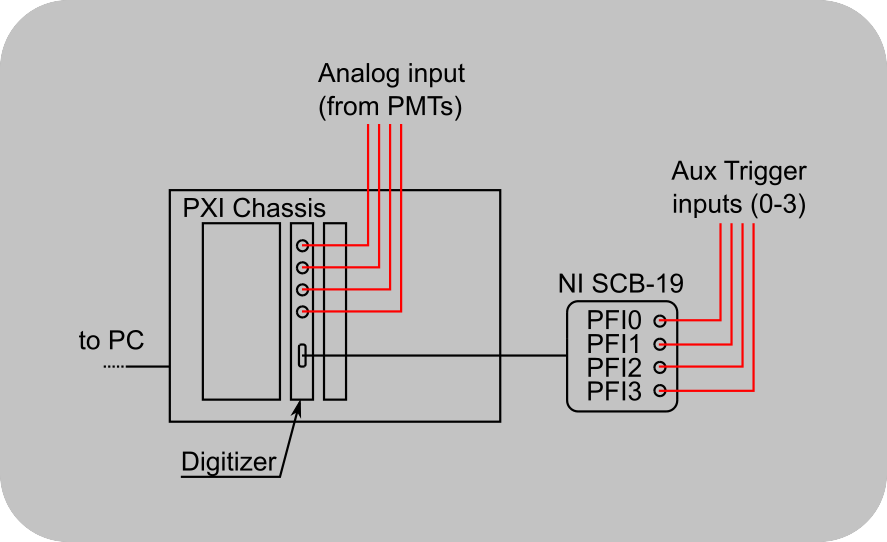 The temporal resolution of the timestamp is equal to the NI FlexRIO digitizer sample period (NI5732: 12.5ns, NI5734: 8.33ns). Because of the high sample rate for the trigger lines, noise on the input signal can result in one edge to be registered as multiple triggers. To get around this problem, ScanImage® requires an input line to be stable for a certain time before a trigger is registered. This method is called ‘debouncing’. Since debouncing is a type of low-pass filter, the delay between the occurence of the trigger and the registration of the trigger would influence the accuracy of the timestamp. However, ScanImage corrects for this delay so that the timestamp accuracy does not suffer from trigger line debouncing.

Debouncing can filter out short trigger pulses. If trigger pulses are lost, it might be necessary to change the debounce time in the ScanImage code.

Decrease the default value to allow short pulses to be registered as triggers.

The auxiliary trigger lines are intended to register events and should not be used to record fast external clocks. Currently there is a hard limit for 1000 registered triggers per frame, however it is advised to limit the number of trigger occurrences per frame to around 10.

A noisy signal that is digitized at a high rate can lead to multiple trigger edges being registered. The digitized signal is filtered to only allow pulses to pass that exceed a width determined by the debounce time. Since debouncing acts as a low pass filter, the debounced signal is delayed relative to the original signal. To record timestamps with high accuracy, ScanImage® corrects for this delay.