ScanImage® includes a new photon counting module, which uses a fast digitizer (>1GHz) to directly sample the output of the transimpedance amplifier. ScanImage® analyzes the voltage signal and performs a peak detection on the signal to count photons in real time. By synchronizing the fast digitizer to the sample clock, time correlated photon counting is supported. This allows ScanImage® to bin detected photons into virtual output channels depending on their arrival time.

Photon counting is most useful for photon limited experiments. This means that less than 1 or less photons are expected to arrive at the PMT per laser pulse. In this regime, photon peaks are clearly separated in the signal. Once the photon rate rises, photon responses start to overlap and the photon discrimination will count multiple photons as a single event. At this point it is advised to switch to photo current integration mode.

Since ScanImage® can perform photo current integration and photon counting at the same time, it is possible to use photon integration for bright regions, and photon counting for photon limited regions in the sample. This maximizes the dynamic range of the microscope, and provides an effective way of noise suppression in the low signal regions.

The following hardware is required to use ScanImage’s photon counting software module:

Select the NI7975 and NI5771 digitizer as Acquisition device on the Resonant Scanner Configuration Page. From the dropdown menu, select the bitfile ‘Microscopy NI7975 NI5771 PhotonCounting.lvbitx’ to enable Photon Counting support in ScanImage. 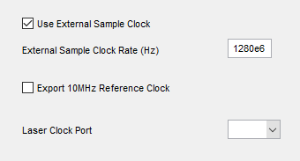 To synchronize the digitizer to the Laser Clock, set up and configure the clock generator, and connect the up-multiplied laser clock to the CLK IN terminal on the NI5771 front panel. In the Resonant Scanner Configuration Page, select ‘Advanced Configuration’, enable the checkbox ‘Use External Sample Clock’ and enter the sample clock value in Hz. Note: the value needs to be smaller than or equal to 1.5GHz.

Once ScanImage® is started, do not disconnect the laser clock. This will cause ScanImage® to enter an error mode, and ScanImage® will need to be restarted.

The photon discriminator flags a photon when a sample is is 1) greater than a user settable threshold and 2) the largest signal value within a sliding window (A). If multiple samples within the window have the same signal value because of noise or a flat peak, multiple photons are flagged for a single peak. A debouncing filter checks for each detected photon if it is preceded by another photon within the debouncing time (B). Photons are then counted and binned into pixels (C).¶

The threshold, the size of the sliding window and the debouncing time are user settable.

If the digitizer is synchronized to the laser clock, the relative time between the laser pulse and the photon arrival can be determined. This allows to bin photons into different channels depending on their arrival time.